If your browser or device is having any trouble displaying our Poker Game, you will find help here. The page below is divided into four sections:

AS OF AUGUST 25, 2018, The Adobe Flash version of our poker game is obsolete. In 2019, most modern browsers will be eliminating Flash entirely, and in preparation for that, our Universal Version (written in JavaScript) is now presented to all users by default. But don't worry, it's better and faster anyway! Please contact us with any issues, and we will work to resolve them.

What are the two versions of the Poker Game? ^Top

How can I tell which version I'm using? ^Top

When you're using the Universal Game, there will be a Version Info button that takes you to a screen similar to this one: 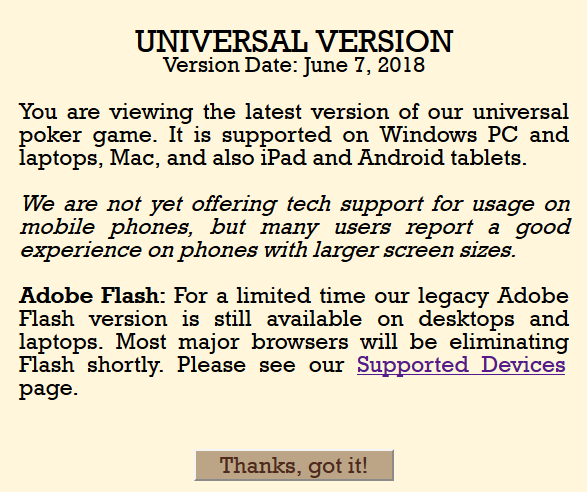 (It is very unlikely you are using the Flash version, unless you've been granted special access to it.)

What devices and browsers support the poker game? ^Top

Our Universal Game works well on a wide variety of platforms. However, due to the 100s of different devices and system configurations available today, we are currently only offering technical support on those listed below.

Laptops and Desktops (Windows and Mac)

When using the Universal Game on your laptop or desktop, we only offer tech support for Windows 7 or later, and Mac OS X 10.10 or later.

On Mac, support is limited to the latest version of the Safari browser, and Chrome.

On Windows, we support:

Support is offered for iPad and (newer) Android tablets, when using the following browsers. Tech support is currently not offered for phones, however, many users have reported a good experience on larger phones, such as the iPhone 6 and newer.

How do I use the Adobe Flash Player on my Windows PC or Mac? ^Top

Please contact us if you are having trouble with our new Universal Version, and we will attempt to resolve the issue. We may allow some users to continue using the Flash game, with the understanding that it is no longer being updated, and will be blocked permanently by most major browsers starting in 2019.