Home/Uncategorized/Why Should I Care About the Rake?
Previous Next

Why Should I Care About the Rake?

There has been a lot of talk recently about Poker Stars’ rake increase, and particularly Daniel Negreanu’s controversial stance that the increase is a good thing for the game (spoiler: he says it will keep the pros away, which is good for the recreational player). So, what is the rake anyway? And what does it mean for you and me?

The Rake and Its Uses

The Rake is the fee taken out of each pot (in a cash game) or tournament buy-in by the cardroom or online gaming site. In brick and mortar casinos the rake pays the dealers, floors, and support staff, and basically pays for all that you see in the room (plus some profit). Online the rake pays for the software, web operations, personnel, and even more profit.

In a cash game a certain percentage is taken out of each pot (anywhere from about 2.5% to 10%) during each hand. The percentage of rake varies from cardroom to cardroom and is typically lower online than live. There is typically a dollar cap on the rake as well, so a really large pot will end up having a smaller percentage of rake removed. Also, rake will typically not be removed if the hand does not go to the flop. An alternate method to the pot rake is the timed rake in which a certain amount of money is collected every half hour. This is more common in higher limit games.

The rake can make the difference between a banner year and losing your entire stake. Click To Tweet

In tournaments a certain amount of money, often called the “fee” is taken out of the buy-in. Some casinos are more clear about this than others, and will list a tournament as $100 buy-in + $20 fee. Others just give you the $120 number and leave it up to you to ask or otherwise determine how much of that is rake. Also keep an eye out for the “dealer payout” or “staff fee”, this is a percentage of your buy in that is going to dealer tips (and you will want to consider it if you money when determining how much to tip). For more on tipping, check out our recent post on the topic.

Why Should I Care?

You should always keep track of where your poker dollar is going. If you intend to play poker with any regularity, it is important to know not only your win rate, but also the amount that is leaking out to rake and tips. If you are playing at a casino (or online) with a very high rake structure, it is virtually impossible to end up ahead at the end of the year. Even slight variations in the amount withheld can have substantial impact on your profit or loss.  Let’s look at a couple of tournament scenarios with $100 and $200 buy-ins

Scenario 1:  Daily tournament with $100 buy-in, has 100 entrants, and pays out 10 positions.  The table below shows what the profitability/loss would be if you play 100 tournaments a year, across slightly different rake structures, with varying success.

Scenario 2:  Daily tournament with $200 buy-in, has 100 entrants, and it pays out 10 positions.  The table below adds a structure which drops the rake by 5% and has no bad beat hold out or staff fee.

As you can see, the rake can make hundreds to thousands of dollars difference if you are playing relatively small buy-in tournaments a couple of times a week. The highly skilled player is sacrificing substantial profit by playing tournaments with aggressive rake structures.

As buy-ins increase, rake decreases, so the top row of the second table is pretty typical, if you move up from a $100 tournament to a $200 one.  Here’s the rub: the competition generally gets stiffer as well, so your results will likely decrease initially as you move up. Before you make the jump, you need to be sure your skill level merits the increased risk.  But if you achieve the equivalent success, there is much greater profitability potential in higher buy-in events. 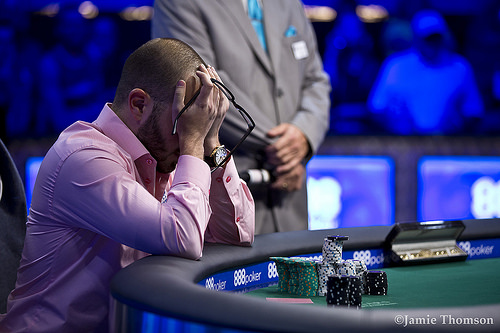 Over time, the rake can make the difference between a banner year and losing much of, if not your entire, stake. You should always know how much of your poker dollar is going to rake and how that will impact you in the long run. An informed player is a smart player.